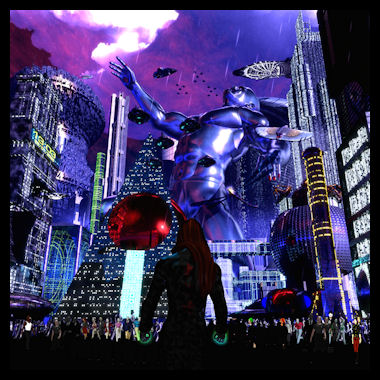 What started off as an illustration, led to a track, which led to the idea of a project….

The concept was to fuse Middle Eastern sounds, with Electronica, and industrial style guitar textures.

It’s taken many years of writing, re-writing, producing, learning, trial and error, and pretty much creating something beyond anything I’ve done before…. 2035 is certainly not what people expect from me….”

2035 is a unique blend of modern heavy guitar pyrotechnics, fused with a more soulful & eastern sound. 13 tracks of passionate & driving music, it is both intense, and at times dark and subtle.

Featuring prominent use of the Armenian Duduk, like on tracks “Dragons Kiss’ & “Game On!”, the fusion of Guitar and Duduk gives 2035 a unique sound compared to most rock & metal albums.

Also making his vocal debut, DFZ sings on 2 songs, including the catchy & infectious “The Game We Play”